People who say “watching movies on holiday is a waste of time because you can do the same thing at home” haven’t visited one of the many amazing independent cinemas in Amsterdam.

It’s akin to saying “why would you eat pasta in Italy? You can just eat pasta at home.” And somewhere in the UK, at the most authentic Italian restaurant, there will be great pasta. And the pasta will be just as good as most restaurants in Italy. But it wouldn’t be the same.

Though Amsterdam isn’t known as being some famous film city, Amsterdammers do love their cinemas. Watching an arthouse film in one of the many independent cinemas in Amsterdam is a truly unique, cultural experience.

“Well, you can walk into a movie theatre in Amsterdam and buy a beer. And I don’t mean just like in no paper cup, I’m talking about a glass of beer.” – Vincent Vega, Pulp Fiction (1994)

14 of the Best Independent Cinemas in Amsterdam

The most beautifully ornate cinema in Amsterdam and quite possibly the world, Pathé Tuschinski has to be on any film fan’s short list of cinemas.

Though it’s not technically an independent cinema anymore as it screens mainly mainstream films, the Art Deco look and history of the place is what makes it a must-visit.

The three other Pathé cinemas in Amsterdam (Pathé Arena, Pathé City and Pathé De Munt) are also not what I would consider ‘Arthouse’ or Independent cinemas. So, sadly they won’t be on this list! There are lots of Pathé cinemas all over the Netherlands, it seems to be the main cinema chain in the country.

One of the most authentic, arthouse, pre-war theatres in Amsterdam! For the finer film fan only.

Though this cinema is a little out of the way in the next town over, Zaandam, I’ll include it because it’s one of the most highly recommended cinemas in Amsterdam. Literally translating to ‘The Factory’, this cinema hosts a regular event called the ‘Men’s Evening’ which screens ‘man’ films and includes a Budweiser and a mini burger for a very reasonable €5.50.

However, ‘tough women’ are also welcome, so something tells me the name is just designed to grab your attention.

This is one of the most cult, underground, independent cinemas in Amsterdam. More like an ‘experiment’ or ‘project’ than a working cinema, Filmhuis Cavia screens whatever films they like. If you’re an artsy student, you might like what they’re screening! 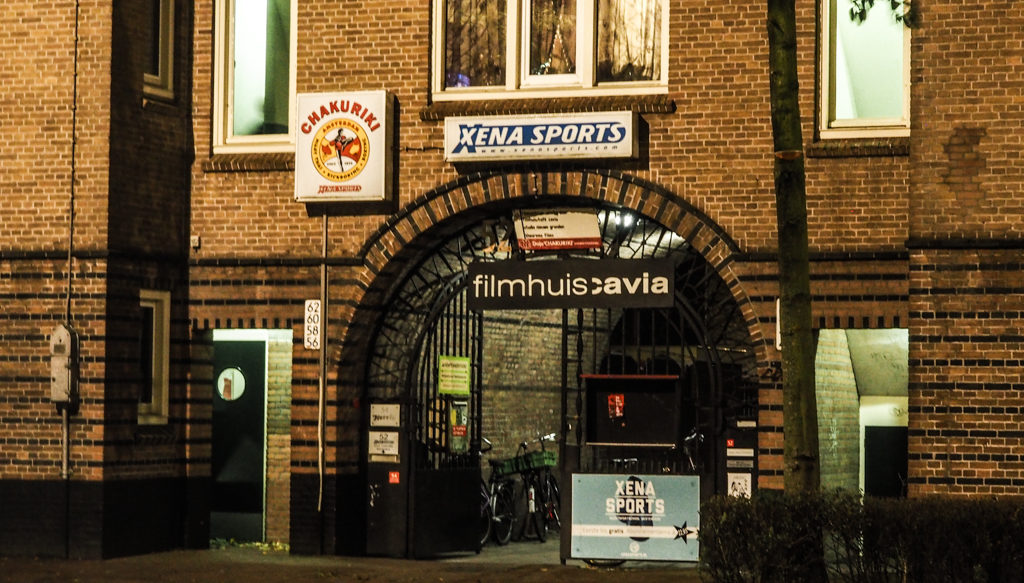 LAB 111 legit looks amazing and if I lived in Amsterdam I’d definitely be hitting up this place. Their film programming suits me to a T.

For starters, one of their programmes is ‘Brunch & Film.’ BRUNCH AND FILM, YOU GUYS!

This looks like a bloody gorgeous cinema. Urgh. I’m almost mad at how gorgeous it looks because I can’t visit any time soon. Filmhallen screens a lot of English indie films as well as some of the most, erm, mainstream world cinema, if that makes sense? And it’s got such pretty cinema screens.

It’s the biggest independent cinema in the Netherlands, no less!

So far, all the independent cinemas in Amsterdam on this list are well-maintained, beautifully restored cinemas screening arthouse films in comfort and beautiful decor.

What about the grassroots, we’re-just-doing-our-best-here indie cinemas? If that’s the arthouse cinema in Amsterdam you’re yearning for, look no further than Cinecenter. They screen arthouse films in a building with padded walls and a classic 1970s-style carpet that explodes with pattern.

Yet another cinema with classic Art Deco style. Honestly, I think that’s four cinemas now, it’s just too much. The decor inside the cinema screens is so beautiful, I imagine it would be quite distracting when watching films.

The Movies also boasts a fantastic restaurant and screens the most popular world cinema.

Most of the independent cinemas in Amsterdam on this list were built pre-war, including the last cinema which opened in 1912. However, the Kriterion was founded in 1945 by anti-Nazi students. To this day, it’s still mainly students that keep this place open.

Check out Kriterion for popular awards-worthy films and a weird Arthouse selection.

I visited this independent cinema in Amsterdam during the IDFA 2016 Documentary Film Festival. It’s a cinema inside an old industrial building with a café/bar and I remember enjoying a glass of Erdinger beer during the film.

Yes, I have drunk a beer, in a glass (not a paper cup), in a cinema just as Vincent Vega from Pulp Fiction did before me. It really is an exciting and enviable life I lead.

This place looks like a super chill place to hang on a Sunday morning. It’s a café/bar/club/art gallery/gig venue/cinema all rolled into one.

They tend to screen a few films over and over which I completely respect as it must be expensive to screen a bunch of different films only a handful of times. And actually, I wish some cinemas would do this more because independent films leave cinemas way too fast!

Not just one of the oldest continually-running independent cinemas in Amsterdam, but in the whole of the Netherlands! This cinema has just the one screen with private balcony seating.

Housed in a former courthouse, De Balie is more of a cultural centre than a straight cinema. They also host debates, theatre and sociopolitical talk shows as well as having a café.

Those are the best independent cinemas in Amsterdam? Have you watched a film at a cinema in Amsterdam? Did you enjoy your experience? Let me know in the comments below!